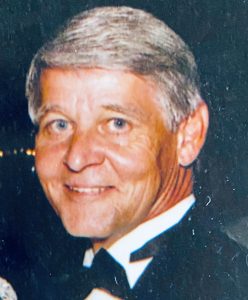 David Harold Yountz, Sr., 78, went home to be with his Lord and Savior very peacefully on May 30, 2022, with his wife and daughter by his side.  David was a devoted husband and father to his loving wife, Peggy (Einstein), daughter Kelley Yountz Day (Rand), and son David Jr.  Loving brother to his twin sisters, Susan Jessie (Ronnie) and Sandra Brockhausen (Eddie).  Adoring ‘Potts’ to his granddaughters, Sydney Day (22) and Sarah Day (20).  He was fiercely loyal to his brothers in law, Freddy Einstein (Clarice) and Jimmy Einstein (Beth) and numerous nieces and nephews.
Born on July 25, 1943 to Harold and Evelyn, David spent many of his early years in Winston Salem, NC.  He graduated from Reynolds High School in 1962 and began his college years at Guilford.  David married his high school sweetheart, Peggy, in 1967, while he was beginning Basic Training in the Army.  He participated in the SERTOMA Club, the American Legion, and the Lion’s Club and volunteered for various fundraisers.

David’s career involved all aspects of the Waste industry, including acquisitions, sales and operations management.  Beginning his career in Winston Salem, David and family moved to Virginia Beach for 20 years, to Chicago for 10 years, before relocating back to the Cornelius/Denver/Lake Norman area of North Carolina.  David retired in 2005.

David loved family vacations, holidays and family reunions.  He could often be found cooking his famous sausage biscuits and gravy in any kitchen he could find.  David and Peggy spent a lot of quality time together along with family and friends on the golf course, at the bridge table, on the boat and on the ski slopes. He boasted his first hole-in-one before Peggy got hers.  David had a ‘regular’ weekend golf game with his buddies, times he cherished and never missed.
A Memorial Service and Celebration of Life will be held on Monday, June 13th, 2022 from 3-5pm at the Verdict Ridge Country Club, 7332 Kidville Rd. Denver, NC.
In lieu of flowers, donations may be made to the American Lung Association https://www.lung.org/ or St. Jude Children’s Hospital  www.stjude.org