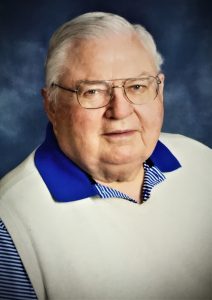 John Wiley Martin Sr, of Denver NC was born on August 14, 1933, John Wiley Martin was the last of four children born to the late James and Rosa Mae Martin. During sunrise of July 25, 2020, heaven erupted in thunderous joy and the gates opened wide as one of God’s most faithful was finally home. However, it is the many years, the relationships, and the story of a life well lived between those two dates that those of us left behind will remember, celebrate, and aspire to for the rest of our days.

Wiley graduated from Charlotte’s Thomasboro High School in 1951. A promising basketball and baseball player, Wiley had the once in a lifetime opportunity to be drafted by the New York Giants shortly after graduation. However, a career in professional baseball would prove to be short-lived, and he was then called into service with the United States Army. In the Army, Wiley was deployed to Kaiserslautern, West Germany, where he served on a telephone company tasked with building communications infrastructure in the region. After two years of dutiful service, Wiley was discharged from the Army and returned home to Charlotte, working for BellSouth as a lineman’s assistant, among other roles, while studying at Charlotte College. Here, his leadership skills continued to grow as he served as Class President in 1958. During this time, he also began teaching Sunday School and held various leadership roles at Enderly Park Baptist Church, something he would do continually throughout the rest of his life at University Hills Baptist Church and Hickory Grove Baptist Church in Charlotte and finally at Denver Baptist Church in Denver, NC.

By his side throughout these early accomplishments was the single most important person in his life, Jeraldeen (Jerrie) Allen, his one and only sweetheart who grew up just a few doors down from him on Tuckaseegee Road. The two would go on to have a love story almost unheard of in this day and time. On June 6, 1954, the couple promised to love one another for better or worse, in sickness and in health, for the rest of their days – a promise they would keep. This was the foundation for their lives and the two would become an example to scores of others over the years. Wiley and his lifelong sweetheart would settle into their home on Allenbrook Drive in Charlotte. Wiley would continue to work for BellSouth for forty-two years, retiring after serving multiple roles in senior management across the Southeast.

Although he achieved great professional success, Wiley made it abundantly clear it was not the accolades or promotions that drove his life. Coming home to his family that had grown to include a daughter, Michelle Martin Simmons, and two sons, John and James Martin, is what Wiley truly treasured and considered the most important job of his life. No matter how busy, he made time to invest in each one of his children, making sure they were involved in church, attending their various sports games and activities, and making sure they each knew they were unconditionally loved and cared for.

After retiring from BellSouth, Wiley and Jerrie moved to Denver, NC.  It was during this time Wiley would embark on his second and most rewarding career. While faithfully serving at Hickory Grove Baptist Church as a deacon, committee member on multiple fronts, and Sunday school teacher, Wiley was also able to combine his sharp mind for business with his passion for service and began volunteering to address complex financial issues within the church. In no time, Wiley would be filling the full-time role of Church Administrator, a job he would love every minute of. Under the faithful and God-centered administration of Wiley and his fellow servicemen, Hickory Grove Baptist was blessed with significant growth, allowing for the undertaking of projects such as Hickory Grove Christian School, a project Wiley was instrumental in bringing to reality, as well as expansions to Hickory Grove’s North campus and Main campus. Wiley would later serve as an ordained minister while at Hickory Grove and acted in this role faithfully for 14 years. A lifelong jokester, everyone has a “Wiley” story, perhaps none more than his fellow ministers and friends from his days at Hickory Grove.

After his retirement from Hickory Grove, Wiley would continue his service to the Lord as a member and volunteer at Denver Baptist Church in Denver, NC, teaching Sunday School and working with church staff on any issue he could help with. He was asked to consult with several churches in the area on specific growth issues and inquiries, a task he thoroughly enjoyed.

Over the years, Wiley and Jerrie’s family grew to include a son-in-law, Bryan Simmons, daughter-in-law, Emilee (Rice) Martin, and five grandchildren, Jacob and Ben Simmons, Jack and Kaylee Martin, and Palmer Martin. His grandchildren were the apple of Wiley’s eye and, just like with his children before them, Wiley took the time to develop a special relationship with each one. The only thing that brought him as much happiness as sitting by Jerrie’s side on a warm sunny day was requesting the “long” table at Casa Garcia, a local Denver eatery, knowing he was going to be joined by all of his children and grandchildren, his sister-in-law, Jean, and sometimes a few of his much-loved nieces and nephews. He would bask in the happiness of these times, talking with his family while joking with the waitstaff, all of whom he knew by name.

When his sweetheart’s health began to falter, Wiley threw himself into the care of his beloved wife. His commitment to her and the life that they had built together remained at the forefront of his mind. What an honor it was to watch him tenderly care for her. Our hearts were broken when a brief, but devastating medical emergency on July 18, 2020 took away his ability to speak, but the very first thing he was able to convey was the question, “How is Mama?” She was always first in his mind, even in the midst of his own health battle. True to who he had always been, Wiley made sure every last thing was done before he was called home. A flood of family and friends lined up, all longing to see this amazing man who somehow managed to convey everything he wanted to say in his shining blue eyes and the grasp of your hand. In the end, no words were left unspoken, no “I love you’” left unsaid, and though we feel as if the tears will never stop, we find ourselves laughing at the hundreds of precious memories and the years’ worth of Wiley’s jokes and stories that he has blessed us with.

It is a very special man who can both command the respect of hundreds with his humble authority, while simultaneously disarming even the toughest characters with his wit, charm and humor. Wiley just loved people. He made each person feel as though they had a special connection with him, because they did. He remembered your name, he remembered to ask about specific details of your life and he made you know that you mattered to him. Simply put, Wiley radiated the love of Christ to others and the joy that he poured out on each person he met changed you forever. Everyone is better for having known Wiley Martin.

There will be an empty place at Westlake Family Restaurant where Wiley spent many mornings telling some of the same jokes he had told time and again, laughing and talking with staff, family and friends. Perhaps the only thing funnier than a “Wiley” joke or story is the way he would laugh so hard at himself while telling it. Even if you already knew the punchline well, you couldn’t help but laugh with him. There will be a Sunday School class that is without a teacher. There will be countless friends and neighbors who will be missing his forever-friendly face, and a family who is absolutely at a loss without the man who protected, loved and provided. All who knew and loved him are heartbroken, but we also know he would expect us to carry on his legacy. We will stop and introduce ourselves to a stranger, invest in the lives of others, tell a joke, love one another, always take care of his precious wife and, most important of all, proclaim the name of Jesus to everyone just as he did. No one will ever be able to fill the shoes of this incredible man, but we will pick up the torch and carry it to the best of our ability to make him proud.

A celebration of Wiley Martin’s life and legacy will be held at 11:00 a.m. on August 1, 2020 at Denver Baptist Church in Denver, NC with a livestream provided for those who are unable to attend via the Denver Baptist Church Facebook Page.  A graveside service will take place afterwards at 2pm at the Unity Presbyterian Church Cemetery located in Denver, NC.  The family wishes to express their immense gratitude, love, and appreciation for all of the support they have received during this difficult time.   If desired, memorials may be made to: