By Catherine on December 12, 2021 in Obituaries 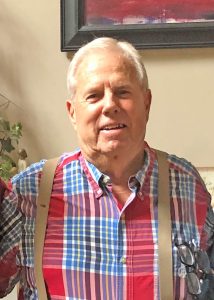 Carroll Wice Sr., 77 years old, passed away on Friday, December 10, 2021 at Atrium Health – Pineville Hospital. A former resident of Franklin, NC., he and his wife, Audrey reside in Lincolnton, NC.

Mr. Wice was a member of Denver United Methodist Church. He retired from Wallace Hardware after 37 years with the company. After he retired, he spent his days, gardening (especially tomatoes), sitting on his porch swing and enjoying his grandchildren and great grandchildren.

Mr. Wice was preceded in death by his parents, Vastus and Maude Wice.

He is survived by his loving wife of 58 years Audrey; children Doug Wice Jr. (Kim), and Dava Lackey (David); 10 Grandchildren; 5 great grandchildren; his beloved sister Norma Bunch and many nieces and nephews.

A service to celebrate the life of Mr. Wice will take place at 2:00 P.M. on Tuesday, December 14, 2021 at Denver United Methodist Church. Interment will follow in the church cemetery.